It seems that my love of curious objects began when I was very small. I had an unusual and interesting childhood. I spent my early years growing up in two fascinating public houses in Suffolk, in the east of England. The first was a 16th century Coaching Inn and the other a Victorian Railway Tavern.

Because my parents and siblings (I was the youngest) were so busy running the pub, I spent a lot of time on my own exploring the (sometimes creepy) rooms, investigating, examining and sorting - I loved to sort out cupboards, drawers, boxes and anything else I was allowed to. (There I am above, exploring an old piano in about 1969). Later, when my childhood became more 'normal', I spent a lot of time out of doors exploring the Suffolk countryside and staying with my farmer uncle and auntie in their 17th century cottage. It was idyllic with their with cats, dogs, chickens and cows and acres of farmland to roam.

I never lost my love for history or unusual objects and at a late age, after doing clerical jobs which didn't suit me at all, I went back to education and obtained a degree in History.

I worked as a genealogist and historical researcher for a few years but I knew there was something missing and I wasn't following my dream.

We moved our family to a beautiful little 17th century thatched cottage where we now live (except our insurance company is failing to meet its obligations after a flood and we're in rented accommodation three years after we put in our claim).

One day when we were out shopping for old interesting objects for our home, I picked up an object and got the idea of a Curiosity Shop.

I came across the most wonderful little bottle and it was then that I knew what I wanted to do. 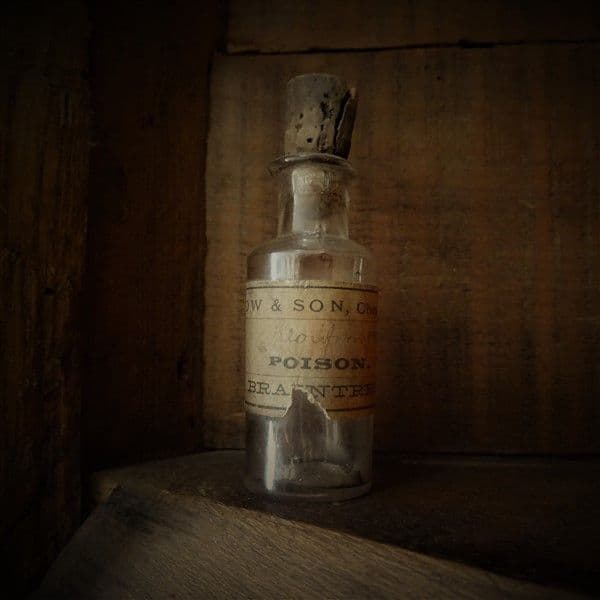 Inspired by the Dickens' story, I wanted mine to be a proper 'Curiosity Shop' selling all sorts of weird and wonderful things; Curious, macabre or beautiful but always unusual.

I've been working as the Curator of my own 'museum' now for over three years and as time passes by, my enthusiasm, passion and knowledge has increased along with my collection of objects.

So, in the shop you'll find many influences from the Victorian period and many objects which would suit the Steampunk enthusiast as well as anything else I find which is especially interesting or beautiful.
When I can, I like to research the provenance of my curiosities, and in many cases this has led me to learn not only about our own history here in the UK, but also other parts of the world, different cultures, religions, traditions and beliefs.
So, if you're looking for something a little bit different take a look.

Here are a few examples of the amazing objects I've come across:
Beautiful items like taxidermy butterfly wing jewellery.
Disturbing pieces like a ring which was cut from the finger of a dead soldier.
Mystifying objects such as crystal balls and fortune telling crystals.
Naughty things like the innocent looking Buddha statue which holds a saucy secret underneath.
Surprising objects like Dr Macaura's Pulsocon which was meant for something other than lowering blood pressure.

I am constantly awed by the things that I find and I hope that you will be too!